The projects from Spring 2022 can be found below.

This is an accordion element with a series of buttons that open and close related content panels.

Students used some basic techniques in data science to predict the outcome of college football games. They started by modifying the well known Elo rating system (often used for chess) to rate college football teams and then used it to predict the outcome of future games. Then they built a more complicated model using logistic regression (a basic model in data science). 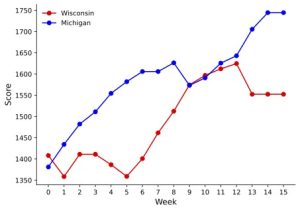 Two different notions of randomness include random walks on groups, and randomness in the counting model. We have experimentally illustrated that “most” elements of SL(2,Z) act with sink-source dynamics on the hyperbolic plane. Our next goal is to use these results, together with various combinatorial algorithms to verify our initial conjecture. 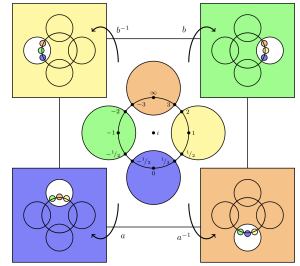 Averages of Polynomials of Entries of Uniformly Chosen Orthogonal Matrices

for certain choices of parameters (a_i, b_i, k_i), 1 ≤ i ≤ m. We fully solved the problem when n= 2, and when all the entries are selected from the same row or column. We provided solutions for certain special cases in the more general setting. We also provided Mathematica simulations to support the above results. 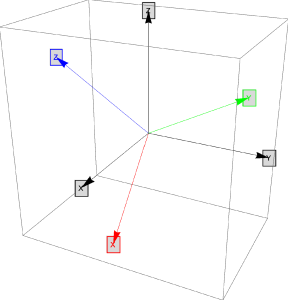 Curve Shortening Flow (CSF) is a process that describes time evolution of smooth curves in R^. During CSF, points along the curve move in the direction of their inward normal vector with velocity proportional to their curvature. The first time at which a curve is no longer smooth (i.e., the curvature at a point becomes infinite) is called the time of singularity. For convex closed curves, this process leads to a single type of singularity behavior, in which, the curve becomes circular and shrinks to a single point. This project sought to investigate examples of initial conditions that lead to more interesting singularity behavior. We considered a family of closed immersed plane curves with 4-fold dihedral symmetry and three distinct convex regions which we call 3-loops.The anatomy of 3-loops consists of nooses (red) and envelopes (blue).When the nooses are large, the envelope pulls apart and the curve becomes convex. When the nooses are small, they disappear first. By well-posedness of CSF, we argue for the existence of a third singularity behavior in which each region disappears simultaneously at the time of singularity. It is conjectured that the same behavior exists for a generalized family of curves with an arbitrary number of regions, i.e., n-loops. 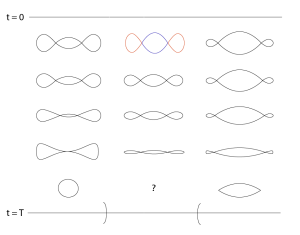 A phylogenetic tree is a diagram that depicts the lines of evolutionary descent of different species that share a common ancestor. The goal of phylogeny estimation is to assemble a tree representing a hypothesis about the evolutionary ancestry of a set of genes, species, or other taxa. Our question of interest is whether Long Branch Attraction (LBA), the phenomena of long branches being incorrectly placed together on a phylogenetic tree, introduces bias to the Maximum Likelihood Estimation (MLE) method in phylogenetic tree reconstruction even for simple evolutionary models and small- scale trees? In this project, we work out the optimality condition (i.e., parameters that give the maximum likelihood) of all possible configurations of the three-species tree with one long branch using analytical solutions to the MLE equations and pair-wise distance analysis. The analytical solutions we obtained verify that the Long Branch Attraction is significant even for small trees.

A translation surface is a 3d object obtained by gluing parallel sides of a polygon, for example gluing parallel sides of a square results in a torus (or doughnut). On each translation surface we can define a set of vectors corresponding to straight line trajectories that start at one vertex of the planar polygon and end at another, potentially passing through parallel sides and wrapping around (as in the arcade game Pac-Man). One question we can ask about this set of vectors is “How randomly are they distributed?” A measure of this randomness is the distribution of the differences between consecutive slopes. This problem has been answered in some specific cases, like the square and the octagon, and steps have been made towards answering the question in more general settings. Part of the process to answer this question requires applying specific matrix transformations to the set of vectors to determine which has the smallest positive slope and horizontal component less than or equal to 1. The goal of this project will be to implement an algorithm to determine this vector of smallest slope for a specific class of translation surfaces.

A multimeter is an electrical tool used to measure, among other things, the effective resistance between two points a and b in, say, a network of resistors, N . This quantity, “the effective resistance of N between a and b” is denoted R_eff(a, b) in what follows. To actually carry out this measurement in practice requires attaching an end of the multimeter to a and the other to b. Once this is done, R_eff(a, b) can simply be read off the multimeter’s display. Informally, we would like to study collections of points in N maximizing effective resistance in some sense. In order to formulate a precise question, the situation described above needs to be expressed in purely mathematical terms. We encode the resistor network as a finite, connected, metric graph G. The edges of G will be in one-to-one correspondence with the resistors in N . Moreover, an edge representing an r Ohm resistor is, by definition, a copy of the interval [0,r]. When two resistors are connected in N we glue the boundaries of the associated edges accordingly. The effective resistance between arbitrary pairs of points in the network can then be calculated using some basic linear algebra and the combinatorial data of the graph G. The goal of this work is to determine the configuration of n points in G for which the pairwise sum of effective resistances between these points is maximized. 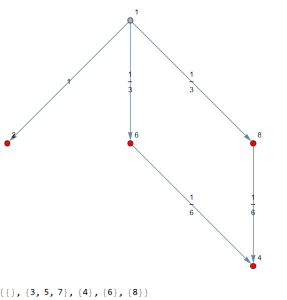 In this project, we explored random walks in free abelian groups and the Heisenberg group (such as the random walk to a metric sphere in the Heisenberg group as pictured).We explored several questions about the long-term behavior of these random walks such as the following: “What does a typical sample path of a random walk look like as the number of steps goes to infinity?” and “If we take a metric sphere of large radius in the Cayley graph, where and after how much time does a typical sample path first hit this sphere?” 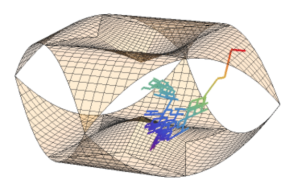